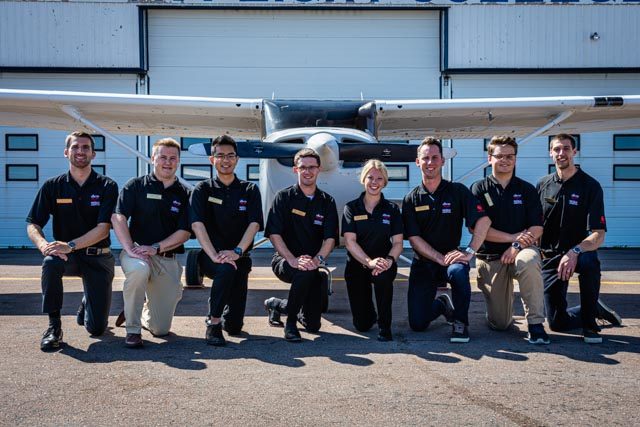 In its search for Canada’s Top amateur pilot, the Webster Trophy competition returns to Greater Moncton area and the Moncton Flight College played host to the 2019 Webster Competition for the Top Amateur Pilot in Canada.

The Webster Memorial Trophy Competition was started in 1932 by Shediac native Dr. John C. Webster, in memory of his son, John Webster Jr., who died while practising for an aerobatic show in St. Hubert, Quebec.

The competition returns to the greater Moncton area for the third time since 1932.  Moncton Flight College, celebrating its 90th anniversary this summer, has hosted the event in 1982 and again in 2008. Over the years numerous MFC alumni have participated in the competition with 2 winners and four runners up.

Not only is the competition returning to its place of birth, but this year will see the return to the competition, as a judge, one of its previous winners, Moncton Flight College alumni Zhaoyang David Shi, who currently flies as an airline pilot.

This year’s competition has eight candidates from across the country vying for top spot in the week long event. All eight candidates will need to complete a written exam, undergo flight tests in both an airplane and a simulator and finally an in depth interview before a panel of three judges.

With the worldwide shortage of pilots in the industry the need to develop interest in young men and women in a flying career has never been greater. The competition serves as one way of accomplishing that goal.

The winner and runner up will receive numerous prizes donated by the competition’s sponsors.  The competition has over 35 sponsors and supporters ranging from small aviation companies to major airlines. Many of them are supplying the various prizes.