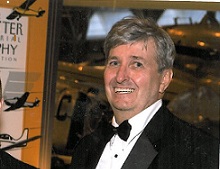 The Webster team were saddened to learn of Wayne Foy’s passing on 20 August, as this year’s Webster competition got underway. Wayne not only was an enthusiastic supporter of Amy’s efforts as Webster administrator for many years, in typical Wayne fashion he jumped in with both feet to take on many duties, including emcee at the banquet, judge when others were not able to be there as well as being a key player in the Amy and Wayne traveling road show, tirelessly promoting Webster throughout Canada. But most important, Wayne turned his passion and experience from a long aviation career into one of the most effective forms of mentorship, guidance and support for young pilots across Canada who attended Webster each year. Visitation will occur at Tubman Garden Chapel, 3440 Richmond Rd, Nepean, ON on Saturday, 8 September from 1000-1200 followed by a celebration of Wayne’s life. We hope many of the Webster alumni and friends will attend. Amy and Wayne are considered like family to the Webster team. Our thoughts are with Amy during this difficult time.