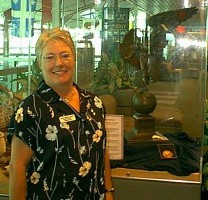 On Saturday, November 8, 2003, Eunice Carter, longtime friend and promoter of General Aviation in Canada, and the administrator and major driving force behind the Webster Memorial Trophy Competition, passed away peacefully at the General Hospital in Ottawa. Known as “Ma Webster” to all of those who were involved in the Webster competition, Eunice demonstrated a tireless dedication to general aviation through her efforts on the Webster and through her frequent interactions with the various support agencies involved with General Aviation. Awarded the Paul Tissandier Diploma of the Federation Aeronautique Internationale (the governing body for sport aviation) earlier this year, Eunice has also won acclaim as the COPA Award of Merit winner in 2000, and as her appointment of “Honourary Snowbird #1″ by the Canadian Snowbirds Aerobatic Demonstration Team. Among her other activities, Eunice was a strong advocate for the Breast Cancer Society, and was an enthusiastic and active member of the Living for Today cancer support group where she was especially effective in helping those just beginning their cancer treatments. Donations to the Canadian Cancer Society or to the Canadian Diabetes Association are gratefully accepted.